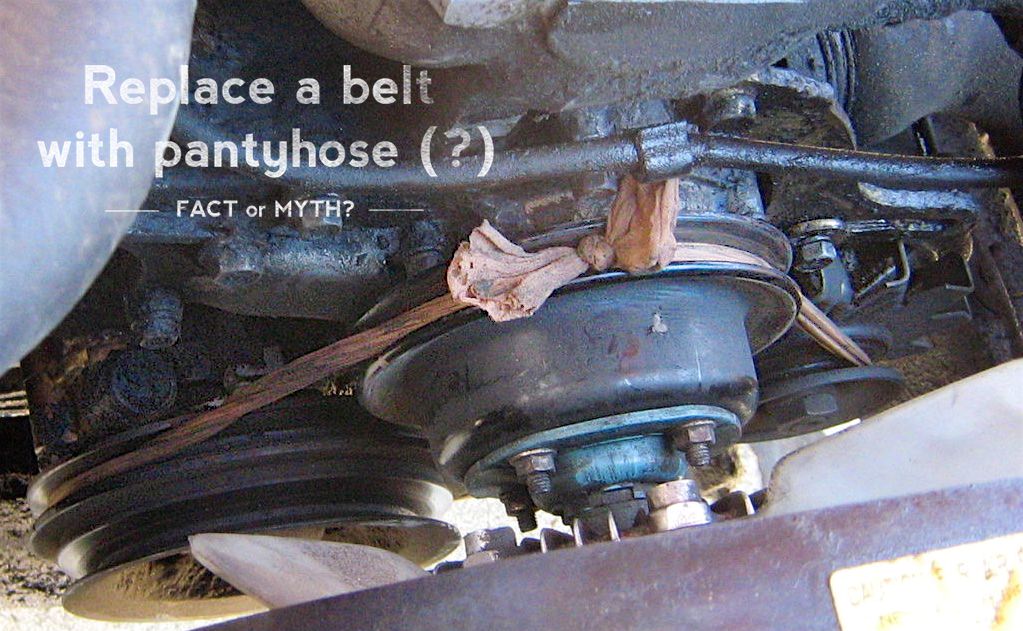 So imagine this. You are on a road trip and you are left stranded because you had a belt slip and snap leaving your car in desperate need of repair. What do you do? One old wives’ tale would have you believe that you could take a donation of a pair of pantyhose from your partner, tie them off into a loop, and use them to replace the snapped belt to get you back on the road and off to a mechanic. Does this actually work? They seem so thin and they have so much stretch that they would surely break…wouldn’t they?

As with all old DIY tricks and rumours, they are based on an equal mix of fact and myth, mostly due to the nature of belt systems in vehicles past and present. Older vehicles use what is called a V-belt system, which consists of a series of belts coming off the crankshaft, each to their own individual accessory group (alternator, A/C, etc). Modern vehicles use what is called a serpentine belt. These long circuitous belts are much thicker by comparison and generally unify all accessories under one belt system. It is a much more elegant solution to power all of your vehicle’s systems with one unifying belt.

“The pantyhose trick” was for vehicles with v-belts, as they tended to have much deeper grooves on the pulleys. You could temporarily replace the belt with almost any strong fabric material and be able to create enough friction on the pulleys to get them moving, even just for a few blocks to save you the cost of a tow. Most serpentine belts, on the other hand, use a flat multi-groove belt, and pantyhose would probably slide off, especially on the smooth pulleys. Even if you had an older V-belt model engine, the pantyhose would only last you a few KMs before either breaking, melting, or sliding off. There is just way too much energy being transferred for this to be a long-term solution.

Final Word: It Was a Fact(ish) Now it is a Myth

In the days of V-Belts and deep grooved pulleys, this may have gotten you out of a jam if your mechanic was a short drive away. Modern vehicle’s with serpentine belts definitely don’t jive with the pantyhose idea, no matter how romantic it is!