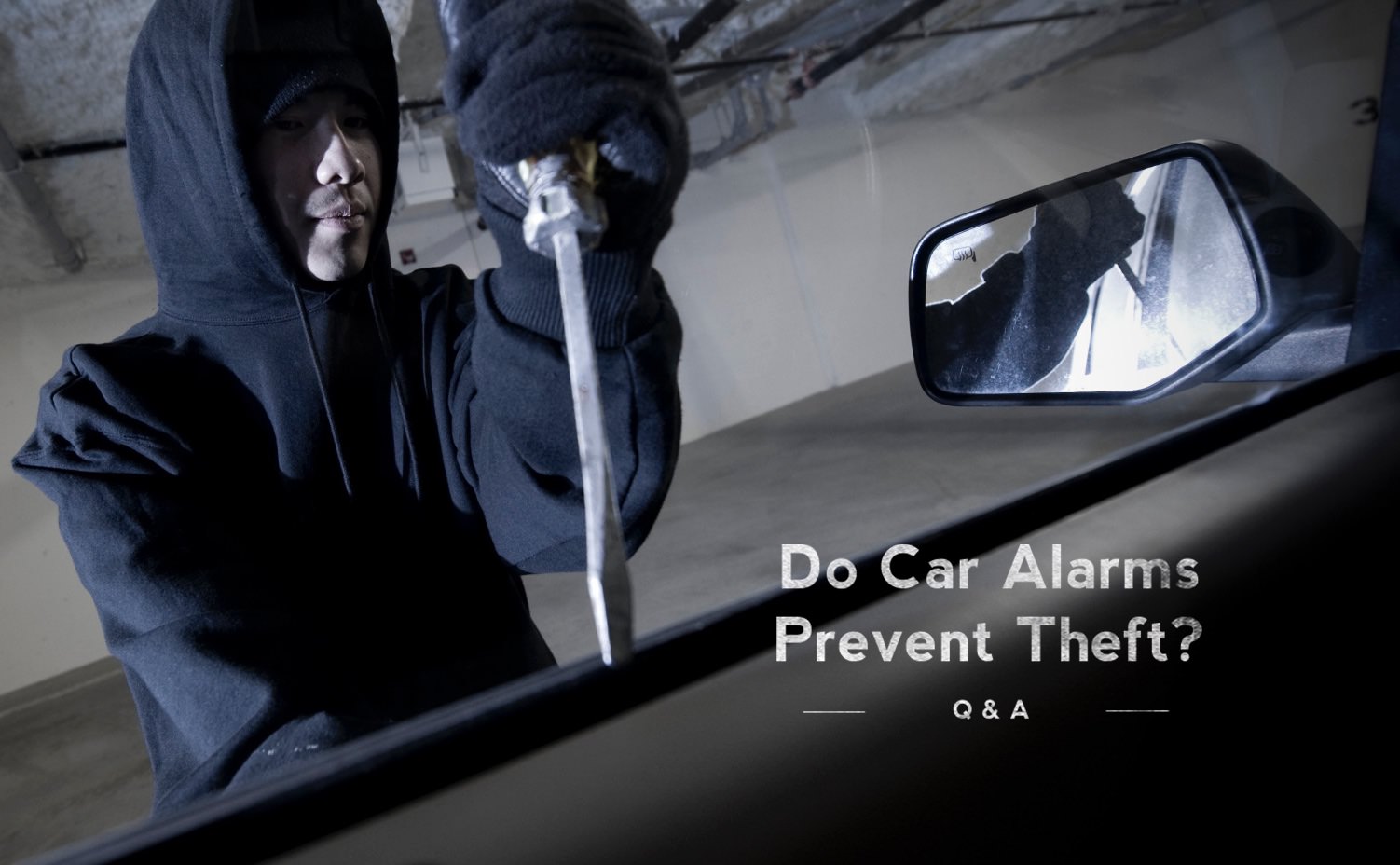 The ubiquitous car alarm going off all night in your neighbourhood has become so commonplace, so routine, that the majority of people are mildly annoyed for a moment, then they completely block it out. This begs the question: “Do car alarms prevent theft or deter a thief?” Below we take a look at a few different sources to see what kind of data we can find. Maybe there is still a use for all of this racket after all.

Where the car alarm came from

The original car alarm, as shown in the original patent drawing below, was a pretty simple invention, and a fairly elegant idea for preventing theft. They consisted of three components: sensors, a siren, and a control unit. According to a car tech expert, these parts interact in a fairly straightforward manner:

“The sensors [which are motion, shock, and pressure activated] are connected to different parts of the vehicle, and they are designed to trip whenever a thief attempts to gain access. When one of the sensors is tripped, it sends a signal to the control unit. The control unit then activates the siren, which will call attention to the vehicle and may scare off the thief.”

The issue with the initial idea for the car alarm is two fold. 1) it assumes that onlookers will spring into action to stop a theft if they hear an alarm, and 2) the alarm was made to detect “jostling” which could very well occur when the car is not actually being stolen.

It turns out 99% of alarms are not tripped by theft

In a fascinating study titled “Rethinking the Regulation of Car Horn and Car Alarm Noise,” researchers from the Columbia Journal of Environmental Law estimated that 95-99% of all car alarms in big cities like New York City were falsely set off, most commonly, by “vibrations of passing trucks, or glitches in the car’s electrical system.” It seems that car alarms go off so frequently in major cities that observers just assume they’re always accidental.

A survey of the same New Yorkers by Transportation Alternatives found that a mere 5% of people who hear car alarms feel compelled to take action against a potential car theft, whereas 95% will not. Couple that with the fact that 59% of those surveyed said that they WOULD report an annoying car alarm to the police, you realize that car alarms are having the opposite of their intended effect. 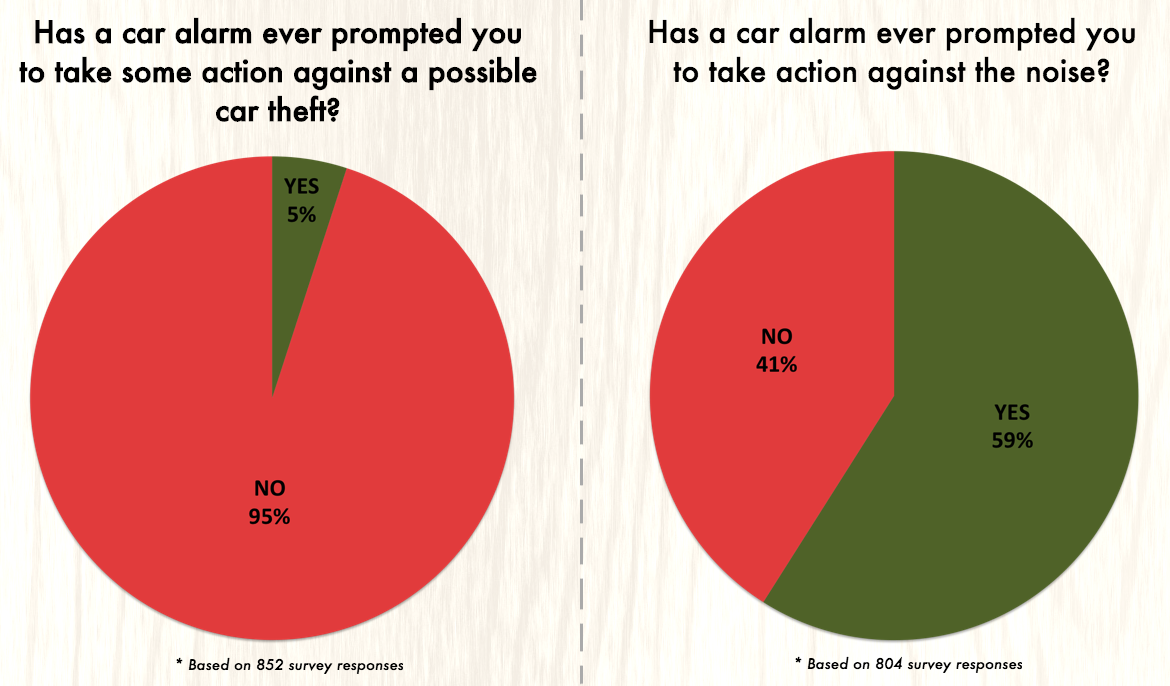 Since a car is stolen in North America every 44 seconds, you would be right in assuming that bypassing built in security measures is pretty easy for professional thieves. “The vast majority of alarms can be disabled in, literally, ten seconds,” a former New York City car alarm installer said. “And a knowledgeable thief can take apart the most sophisticated $1,000 alarm installation in less than 5 minutes.”

How could this be? Well, the knowledge it takes to get past car alarms, locks, and theft deterrents is actually passed around quite freely. This is becuase there are plenty of times that there is a valid reason for bypassing a security feature. Tow truck drivers, for example, need to be able to tow a stuck or offending vehicle without a swat team coming to arrest them, so they learn all the same tricks that thieves do. One tow truck driver said:

“There isn’t a car I cannot unlock. If I want your car, I will unlock it, usually get it in neutral, and some I can even start without the keys or ever damaging the car in any way or the alarm ever making a peep. [When the alarm goes off], most aftermarket alarms are easy to override or completely disable in about 15 seconds. My customers and the cops are always amazed at the speed with which I am able to unlock a car and disable the security system…car alarms are pretty much useless.”

If they are useless, why have them?

Car manufacturers know that car alarms are not a great deterrent, but they also know what people expect when they are buying a new vehicle. That is why car alarms are still installed in most new cars, but it also explains why they are constantly working on new technology to put a wrinkle in vehicle theft networks.

Car manufacturers have seen significant success using immobilizers (a system containing a key fob carried by the driver, and a base station mounted in the vehicle). When Ford integrated them into their new Mustang, theft rates declined by 77%, and insurance claims decreased threefold. Likewise, when Nissan factory installed the devices in their Maxima line, average reported theft losses plummeted from $14,148 to $5,429 per year.

Hackers are always looking at ways to get through high tech security, but doesn’t mean that we should stop taking action against theft. As our methods improve, it is guaranteed to slow down the pace of uneducated, spur of the moment thieves.

Stay tuned next week for a breakdown of way to prevent theft of your vehicle, new or old, using a some great common sense tips.

Which Jumper Cables Should You Buy?
Along with a spare tire, blanket, water, and a few energy bars, jumper cables are an absolutely essential part of your car safety kit. Here’s how to choose them.
Is it OK to Buy Generic Tires?
Tire selection can be one of the most mind-boggling parts of car ownership. Are OE tires worth it, or is it okay to go with a different set of rubber?
My Car Won’t Shift Past Second Gear
Is your automatic car stuck in first and second gear? Here is what might be going on, and how we can fix the issue. Never hesitate to get in touch.
Copyright Parkside Motors - All Rights Reserved
Back To Top